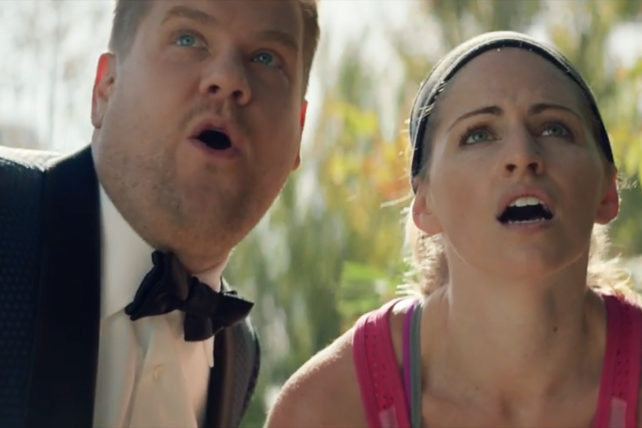 He’s belted out show tunes with Lin-Manuel Miranda while puttering around Hell’s Kitchen and warbled along with Adele while squiring her around London’s Kensington district, and now James Corden is giving his pipes a workout in Downtown L.A. in a pair of promos for the 59th Annual Grammy Awards.

The indefatigably upbeat late-night chat show fixture and first-time Grammys host appears in two 30-second spots designed to whip up some buzz for the annual celebration of music, which is set to air on CBS Sunday, Feb. 12. As part of The Recording Academy’s “Believe in Music” campaign, the host of CBS’s “Late Late Show” channels his inner pop star in order to lift the flagging spirits of a gridlocked married couple ensnarled in freeway traffic and a jogger who’s hit the wall during her morning run.

The first spot, which features Mr. Corden launching into the first verse of Bruno Mars’ “24K Magic,” premieres Saturday, Jan. 14, during CBS’s coverage of the AFC Divisional Playoff between the Texans and Patriots. Barring a blowout, the placement within the weekend’s lone primetime NFL broadcast should put the Grammys spot in front of an audience of around 32 million viewers.

On the heels of the traffic jam promo, the second spot will work its way into CBS’s on-air rotation during the week of the 15th. In that particular execution, Mr. Corden gives the halted runner a musical pep talk of sorts by way of his interpretation of Sia’s 2016 single “The Greatest.”

As it so happen, both Bruno Mars and Sia last year appeared in their own “Carpool Karaoke” segments. Since Mr. Corden took the reins of the “Late Late Show” in March 2015, the viral franchise has garnered well north of 1 billion YouTube views; an unabashed exhortation of the giddy kick of singing along to the car radio, “Carpool Karaoke” is emblematic of everything the Academy hopes to convey in its “Believe in Music” campaign.

“Given the unique sensibilities of James Corden, we felt that he was the perfect individual to build these spots around,” said Evan Greene, CMO, The Recording Academy. “In many ways, he really is the personification of the uplifting power of music … so who better to help portray that ideal?

“Believe in Music” marks the 10th consecutive year in which the Grammy overseers have performed a duet with TBWAChiatDay, and only the latest in a series of campaigns that examine music’s impact on the human spirit. “Every year, we take stock of what’s going on in music and we use the Grammys as a focal point to create a really powerful message,” Mr. Greene said. “The world is in a pretty heavy place right now, so we wanted to remind people of music’s power and ability to uplift us all. It’s a catalyst and an inspiration.”

But for a huge ratings spike in 2012, when the music community’s response to the sudden death of Whitney Houston on the eve of the 54th installment of the Grammys helped deliver the second-biggest audience in the event’s history, the turnout for the annual broadcast has been remarkably consistent. Last year’s broadcast marked the seventh straight time CBS topped the 25 million-viewer barrier; by comparison, in the five years prior to that run, the Grammys averaged around 18.1 million viewers.

The reach of the Grammys is such that last year’s show was the sixth highest-rated non-sports broadcast of 2016. On average, advertisers are paying in the neighborhood of $1.2 million to $1.3 million for 30 seconds of airtime in next month’s broadcast.

While The Recording Academy doesn’t have a fully articulated map of where and when the two spots will air, if recent history is any indication, look for the promos to pop up in CBS comedies like “Mom” and “Life in Pieces,” as well as during upcoming episodes of “NCIS,” “Blue Bloods” and “Madam Secretary.” Last year’s promos also aired a number of times during Mr. Corden’s show, as well as in its lead-in, “The Late Show with Stephen Colbert.”

“We don’t have a specifically articulated media plan per se, but CBS traffics them into their system, and when they can find an opportunity, they’ll make space for them,” Mr. Greene said.

CBS’s live presentation of the 59th Annual Grammy Awards gets underway Sunday, Feb. 12, at 8 p.m. EST. Among the most high-profile nominees are Beyoncé, who leads all comers with nine nods, and Adele, who will be competing with Beyoncé for three of the night’s biggest prizes (Best Album, Best Record and Song of the Year). Also in the running to amass a whole lot of hardware are Drake, Kanye West and Rihanna, each of whom have been nominated in eight categories.