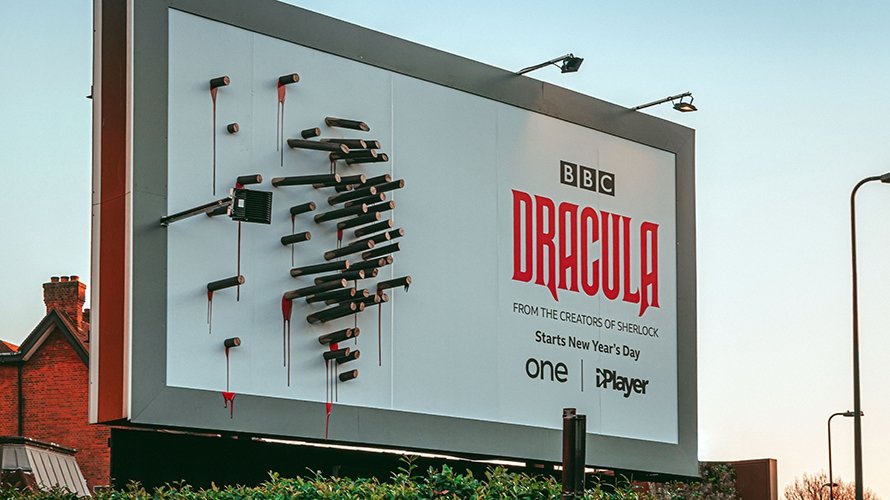 This Dracula Ad Gets Creepier as the Sun Goes Down

Dracula, the gothic masterpiece from Bram Stoker, is the century-old gift that keeps on giving—not only to fans and content producers, but also to marketers looking for a juicy project to sink their teeth into.

Ad mavens in the U.K. have captured the essence of vampiric DNA and blended it with modern outdoor ad tech to draw viewers to BBC One’s new version of the classic blood-sucker tale, airing on TV this week.

BBC Creative’s billboard appears to be just speckled with wooden stakes by day. But as night falls, those weapons start casting shadows across the canvas, eventually revealing the silhouette of the show’s star. The undead monster, after all, only operates under cover of darkness.

The outdoor campaign, running in London and Birmingham, is “one of the most ambitious special builds we’ve ever undertaken,” says Olly Harnett, creative head of BBC Creative. It also includes a glass box at street level that contains a single sharpened stake with the directive, “Break in case of vampires.”

Dracula, from Mark Gatiss and Steven Moffat (beloved for their work on Doctor Who and Sherlock), stars Claes Bang as the magnetic villain from Transylvania. The Guardian calls the show “an homage to all the great Counts who have gone before, but still entirely its own thing.”

Ads have aimed to convey the program’s “dark humor and rock star swagger,” says Chris Hooper, BBC One’s head of marketing. This approach can be seen in the use of “Bloody Legend” as a tagline and Iggy Pop’s “Lust for Life” as the trailer’s soundtrack: